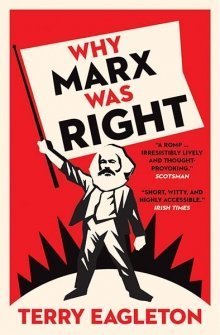 In this combative, controversial book, Terry Eagleton takes issue with the prejudice that Marxism is dead and done with. Taking ten of the most common objections to Marxism — that it leads to political tyranny, that it reduces everything to the economic, that it is a form of historical determinism, and so on — he demonstrates in each case what a woeful travesty of Marx's own thought these assumptions are. In a world in which capitalism has been shaken to its roots by some major crises, Why Marx Was Right is as urgent and timely as it is brave and candid. Written with Eagleton's familiar wit, humor, and clarity, it will attract an audience far beyond the confines of academia.

Terry Eagleton is distinguished professor of English literature, University of Lancaster. He is the author of more than fifty books spanning the fields of literary theory, postmodernism, politics, ideology, and religion. He lives in Northern Ireland.

Reviews:Tristram Hunt on The Guardian wrote:

"...for any admirer of Eagleton or Marx, the book is a disappointment. There is none of the logical precision, winning prose or intellectual ambition displayed most recently in Eagleton's Yale lectures on faith. Part of the problem is the structure. This is a work of intellectual rebuttal, as chapter by chapter Eagleton takes on a century of misreading Marx. All of which means he is fighting on an enemy territory of dreary objections. For example, there's a long attempt to justify the 1917 Bolshevik revolution and the Leninist aftermath, as well as the East German system of childcare – not something, I imagine, Marx and Engels themselves would have bothered with. The consequence of such deviations is that there is little sense of the anger, brio and bravado of Marx and Engels; none of the humour, irony and creativity so central to the Marxian heritage. Instead, this book reads like a rapidly crammed set of notes for an American midwest college course. [...] Marx might well have been right about an awful lot, but sadly Eagleton fails to make you care very much."

"Alas for the reader [...] the targets at which he aims are not so much the “standard” ones as the easiest to hit. There’s no mention, for example, of the labour theory of value, perhaps because this wouldn’t allow him the rhetorical flourishes he so enjoys. Instead we have a familiar shooting-gallery of dead ducks – and even here Eagleton’s rebuttals do not always confirm the promise of his title. Was Marx a determinist? 'There is no evidence,' Eagleton insists – but only two pages later he writes of Marx’s 'austere determinism'. Was Marx a utopian? The answer is 'a decisive yes and no'. [...] if Marx is to become “the next big thinker” of the new century (as the New Yorker proclaimed him) an honest assessment is necessary: acknowledgment of his insights into capitalism’s perennial instability – the boom-and-bust rhythm that Gordon Brown thought he could silence, the creative destruction described by Joseph Schumpeter – must be accompanied by an admission of his fallibility. I still believe that Eagleton’s frisky intellect could give us a version of Marx for our times. This, regrettably, is not it."

Eagleton Introducing Why Marx Was Right 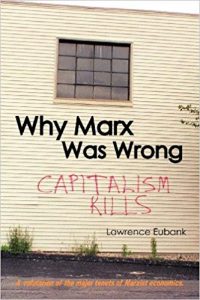 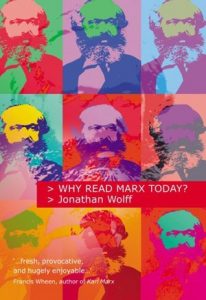