When More Is Not Better: Overcoming America’s Obsession with Economic Efficiency (2020) 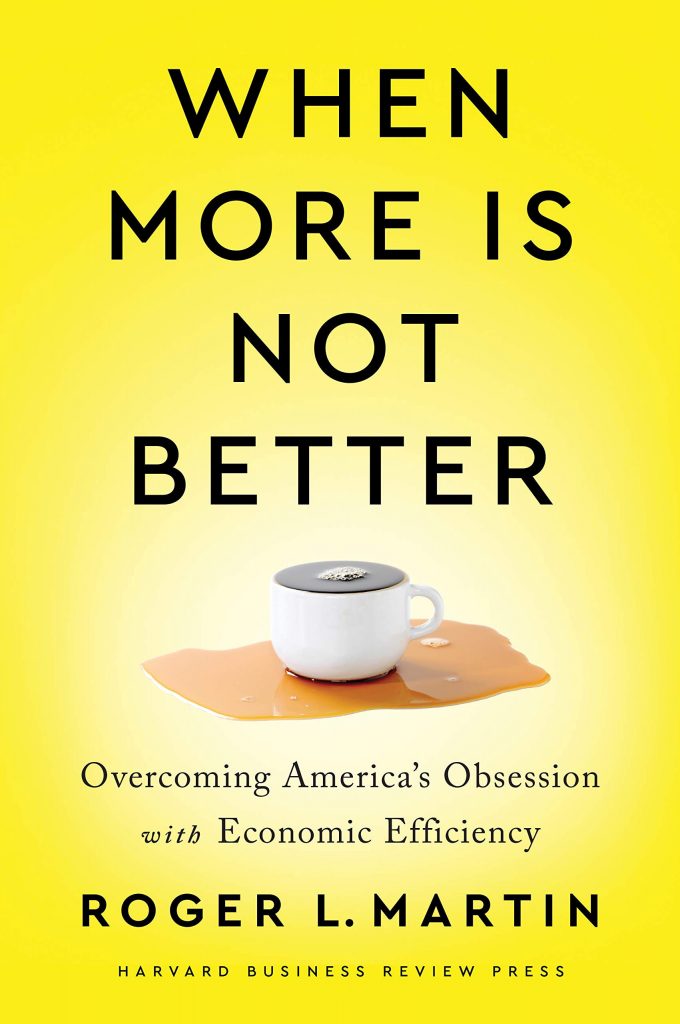 American democratic capitalism is in danger. How can we save it?

For its first two hundred years, the American economy exhibited truly impressive performance. The combination of democratically elected governments and a capitalist system worked, with ever-increasing levels of efficiency spurred by division of labor, international trade, and scientific management of companies. By the nation's bicentennial celebration in 1976, the American economy was the envy of the world.

But since then, outcomes have changed dramatically. Growth in the economic prosperity of the average American family has slowed to a crawl, while the wealth of the richest Americans has skyrocketed. This imbalance threatens the American democratic capitalist system and our way of life.

In this bracing yet constructive book, world-renowned business thinker Roger Martin starkly outlines the fundamental problem: We have treated the economy as a machine, pursuing ever-greater efficiency as an inherent good. But efficiency has become too much of a good thing. Our obsession with it has inadvertently shifted the shape of our economy, from a large middle class and smaller numbers of rich and poor (think of a bell-shaped curve) to a greater share of benefits accruing to a thin tail of already-rich Americans (a Pareto distribution).

With lucid analysis and engaging anecdotes, Martin argues that we must stop treating the economy as a perfectible machine and shift toward viewing it as a complex adaptive system in which we seek a fundamental balance of efficiency with resilience. To achieve this, we need to keep in mind the whole while working on the component parts; pursue improvement, not perfection; and relentlessly tweak instead of attempting to find permanent solutions.

Filled with keen economic insight and advice for citizens, executives, policy makers, and educators, When More Is Not Better is the must-read guide for saving democratic capitalism.

"The conceptual depth is, for the most part, shallow enough for a popular audience to grasp, but the prose negates this accomplishment. It reads like a stiff textbook with higher aspirations. [...] I found myself drawing contrasts with the works of Robert B. Reich. In books like Saving Capitalism, [...] His analysis goes deeper than a balance sheet. Martin withholds this element of empathy. Or, rather, he directs it toward the economy as an abstraction. [...] What is Martin’s proposal for discouraging the surrogation of proxies? Use more proxies. A broader variety of measurement tools may indeed produce a more accurate model of economic activity. But this analytical impulse reveals a weak commitment to the book’s central argument against an obsession with efficiency. Even while arguing for a laxer approach to waste reduction, Martin falls prey to the analytical entanglements of his field. He proclaims that “slack is not the enemy” but advocates for optimal levels of slack in order to boost long-term efficiency. [...] Martin’s proposals, as a whole, are timid and unimaginative. One of his most substantial proposals is to simply raise the top marginal tax rate. I voice no objections, but I take issue with this point’s incomplete rationale. [...] Martin does not suggest what might be done with an increase in tax revenue. There is no morality or hope here, only a beast to be fed. [...] Reading When More Is Not Better, I was left feeling hollow by its unfulfilled promise. There are hints within that the author recognizes the spiritual importance of meaningful work in a person’s life [...] But these moments are sparse and short-lived. This tone-deaf book ultimately doesn’t break with its academic tradition enough to justify its premise. It doesn’t deserve to claim that the economy is like a living organism without centering its approach on the living organisms that compose the economy."

"the obsession with removing anything seen as an “inefficiency” is leading to economic infrastructures and ultimate outcomes—including massive income inequality—that are unsustainable. And so we must imagine it otherwise. And Marin does, offering up a book that is far more focused on solutions that are already in place and working than it does on the problem. [...] It is, as he writes, a systemic issue, but Martin is wise enough to have explored its effects on the lives of individuals—their lived experiences, opinions, and outlooks—by embarking on a six-year project at the The Martin Prosperity Institute conducting in-depth interviews called the Persona Project. [...] What if we designed a model based on complexity, adaptivity, and systemic structure? Martin helps us envision the result, and lays out an agenda for business executives, political leaders, educators, and citizens to achieve it."

"One of the great things about the book is the ratio of history to solutions. In 99% of economics books I review, history dominates. It goes on forever, page after endless page. Only the final chapter proposes solutions, and after all that history, it is usually a total letdown. In When More is not Better, Martin actually acknowledges this, and provides a nearly 50–50 split between history and solutions. His solutions are innovative, intuitively correct, and eminently doable. He also stresses that there are no cure-alls. Everything needs the flexibility to adapt, continuously. It needs to start everywhere, with really tiny adjustments that might seem insignificant. A bold new national policy will not work alone; it has to be small steps that add up to big changes. This is refreshingly different, and even hopeful, because it means every government, every company, as well individuals can make this happen. He says to save our precious democratic capitalism, it must."

"Martin serves us well by adding his voice to the calls for change, consolidates earlier insights and introduces new ones. But I think readers will need to establish for themselves a much deeper understand of systems thinking than Martin is able to provide in this book. [...] Martin, like others before him, is right to suggest we need to drop the machine analogy. But I am less comfortable with the idea of saying the alternative is a natural system. I think that is too simplistic. We depend on a complex system-of-systems that are each different in type and in nature in important ways, and are each related to other systems in a variety of different ways. A useful analogy is a constellation of interdependent systems, some bigger and more impactful in relation to others." 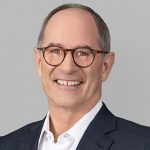 Roger L. Martin is Professor of Strategic Management, Emeritus, at the University of Toronto's Rotman School of Management, where he served as Dean (1998–2013) and as Director of the Martin Prosperity Institute (2013–2019). In 2017 Thinkers50 named him the world's #1 management thinker. He has published eleven books, including Creating Great Choices with Jennifer Riel and Playing to Win with A.G. Lafley, as well as many Harvard Business Review articles. Martin is a trusted strategy adviser to the CEOs of many global companies and originally hails from Ontario, Canada.

Table of Contents of More Is Not Better

Part One: The Problem 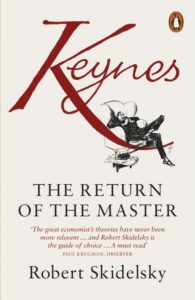 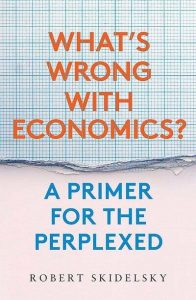 What’s Wrong with Economics? A Primer for the Perplexed (2020) 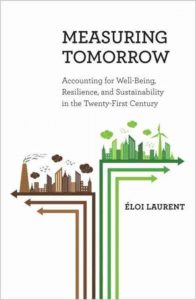