The Oxford Handbook of Adam Smith (2013) 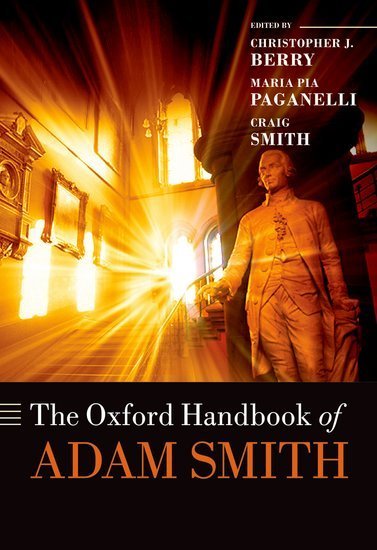 Adam Smith (1723-90) is a thinker with a distinctive perspective on human behaviour and social institutions. He is best known as the author of the An Inquiry into the Nature and Causes of the Wealth of Nations (1776). Yet his work is name-checked more often than it is read and then typically it is of an uninformed nature; that he is an apologist for capitalism, a forceful promoter of self-interest, a defender of greed and a critic of any 'interference' in market transactions. To offset this caricature, The Oxford Handbook of Adam Smith provides an informed portrait. Drawing on the expertise of leading Smith scholars from around the world, it reflects the depth and breadth of Smith's intellectual interests.

After an introductory outline chapter on Smith's life and times, the volume comprises 28 new essays divided into seven parts. Five sections are devoted to particular themes in Smith's corpus - his views on Language, Art and Culture; his Moral Philosophy; his Economic thought, his discussions of History and Politics and his analyses of Social Relations. These five parts are framed by one that focuses on the immediate and proximate sources of his thought and the final one that recognizes Smith's status as a thinker of world-historical significance - indicating both his posthumous impact and influence and his contemporary resonance.

While each chapter is a discrete contribution to scholarship, The Oxford Handbook of Adam Smith comprises a composite whole to enable the full range of Smith's work to be appreciated. Its benefits:

"This is a very nice format. Four contributions per topic does not triangulate a ‘truth’ regarding Smith, but they do offer a multidimensional perspective on each topic, allowing the reader to reflect on each topic with a depth of vision. [...] Fortunately, volumes like this one keep that great mind active in the current discourse."

Jeffrey T. Young on Journal of Markets and Morality wrote:

"readers of this journal will find much stimulating material here. For example, the moral status of commercial societies is one theme that runs through several contributions, from Dennis Rasmussen’s chapter on Smith’s interaction with Rousseau’s critique of contemporary society, to Ryan Patrick Hanley on virtue theory, to Spiros Tegos on corruption. Maria Pia Paganelli’s chapter on markets and morality stands out as of particular interest to readers of this journal. It is the only piece that attempts to integrate TMS and WN from an economics perspective. She argues that there is a synergistic relationship between markets and morality: They mutually interact in ways that promote both morality and economic success. She offers three arguments on how markets promote morality. First, economic growth fosters life—a point that Smith makes in both TMS and WN with respect to infanticide and euthanasia. Second, institutional development fosters individual liberty over dependency. Third, markets generate interaction with strangers, which promotes the development of impartiality in moral judgments. [...] While the project of setting the record straight on Smith and showing the depth and breadth of his thought is excellently accomplished, I found the two chapters on Smith’s analytical economics problematic. For most of the nineteenth and twentieth centuries, Smith’s legacy has been as the 'father of modern economics.' Mainstream and Marxian economic analysis both emerged from the analytical economic
theory of WN. The expositions of Smith’s economics come from scholars of a modern, heterodox school of Sraffian economics—albeit very good ones who are knowledgeable about Smith’s text. [...] not giving contemporary mainstream economists a voice in expounding on Smith as an economic theorist seriously distorts noneconomists’ view of Smith’s analytical system. To make matters worse, the only mainstream voices come from the 'new right'—a pejorative usage in and of itself (why 'new right' and not 'classical liberal'?)—and then only mediated through the ideas of Friedman, Buchanan, and Hayek."

George Grantham on The Journal of Economic History wrote:

"It is symptomatic of Die Adam Smith Industrie called forth by the bicentennial publication of Smith's complete works in 1976 that only four (on a latitudinarian count seven) of the 28 chapters in this handbook deal with Smith's economics. That disproportion poses an intellectual puzzle, since while no one seriously disputes that Smith was one of the truly original thinkers of his age, it is arguable that without the Wealth of Nations he would rank as a secondary member of the Scottish Enlightenment whose claim to fame rests on his elaboration of certain notions suggested by Hume concerning the cognitive role of imagination to explain the formation of manners and moral values, first-rate work no doubt, but hardly the stuff of genius. Yet it is this secondary production to which Smith owes his present status among students of eighteenth-century thought, who for the most part seem uninterested in his economics. This is a book for specialists, but not in economic history or the history of economic thought. [...] With the exception of the essays on economics, the contributions overlap considerably, and many are wordy, imprecise, and gummy. It is discouraging, though perhaps revealing, that some of the gummiest are by university professors of English. The collection would have benefitted from editorial pruning. As it is, the philosophic and literary material is indigestible. The essays on Smith's economics are mixed and provide no novel insights."

"In view of the central importance of Smith’s political œconomy, it is therefore disappointing that this Handbook should devote only four out of 28 chapters to ‘economics’, or five if the chapter on Marx be counted. Though each contributor in Part IV gives us interesting and important matter, it is inevitable that much should have been ignored, and not surprising that economic themes should have cropped up elsewhere in the volume, as in the chapters by Levy and Peart, Harkin, Craig Smith and Sen. It seems to me that among other themes of economic interest, the Handbook would have been enriched by some consideration of the development of Adam Smith’s ideas by the English School; of some important but neglected features of his analysis of growth and development; of the part played by the late Paul Samuelson in explicating these in terms of modern categories; of the attempts by Samuelson and Negishi to vindicate Smith’s price theory; and of a seeming incoherence at the heart of Smith’s overall vision of the economy. [...] ‘The Contemporary Relevance of Adam Smith,’ Amartya Sen believes, is that ‘his ideas remain intensely pertinent to the modern world’ (580). [...] If Smith’s 18th-century ideas really are ‘pertinent to the modern world’ therefore, it is his economic ideas that count. [...] As for Smith’s moral philosophy, astronomy, natural theology, aesthetics, rhetoric and jurisprudence, richly rewarding as these are to students of Enlightenment intellectual history, they are of no more relevance to our present concerns than the opinions on these matters of any other 18th-century savant."

Table of Contents of The Oxford Handbook of Adam Smith 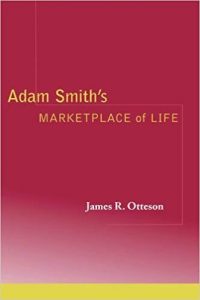 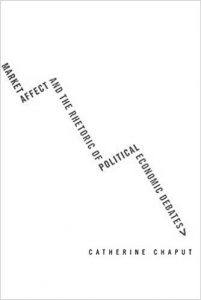