The Market for Virtue; The Potential and Limits of Corporate Social Responsibility (2006) 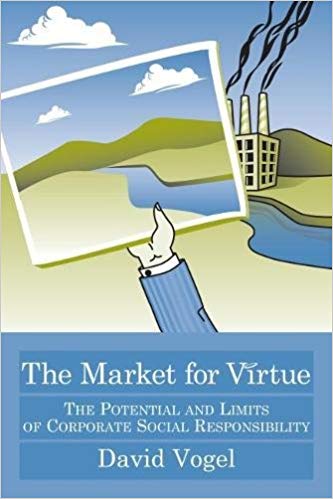 In The Market for Virtue, David Vogel presents a clear, balanced analysis of the contemporary corporate social responsibility (CSR) movement in the United States and Europe. Vogel discusses recent CSR initiatives and responds to new developments in the CSR debate. He asserts that while the movement has achieved success in improving some labor, human rights, and environmental practices in developing countries, there are limits to improving corporate conduct without more extensive and effective government regulation. Put simply, Vogel believes that there is a market for virtue, but it is limited by the substantial costs of socially responsible business behavior.

David Vogel is the Solomon Lee Professor of Business Ethics at the Haas School of Business and a professor of political science at the University of California, Berkeley. His books include Barriers or Benefits? Regulation in Transatlantic Trade (Brookings, 1998); Kindred Strangers: The Uneasy Relationship between Politics and Business (Princeton, 1996); and Trading Up: Consumer and Environmental Regulation in a Global Economy (Harvard, 1995).

Reviews:Danyelle Guyatt on The Journal of Socio-Economics wrote:

"Professor Vogel offers an exceptionally well-balanced and readable assessment of the market forces that may promote, or inhibit, the ability of companies to behave in a socially responsible manner. Rather than presenting the normative case for corporate social responsibility (CSR), Vogel confronts the practical realities of CSR from the corporate perspective by analysing the demand and supply for virtue. Numerous examples are provided to demonstrate that whilst some consumers, workers and investors may demand higher standards of responsible corporate conduct, such demand continues to represent a distinctly minority voice, attenuating the market drivers of corporate responsibility. [...] The most significant contribution of Vogel’s book to the existing literature on CSR is his frank examination of the issues from the perspective of the companies themselves, i.e. what does it mean to be a responsible corporation and what are the forces or incentives that make such a goal more achievable or more difficult? By posing such questions, Vogel has moved the debate from the philosophical, normative case for CSR to a more realistic assessment of its benefits and shortcomings from a business perspective. Vogel reminds us that until we acknowledge that there are limitations to the market for virtue as it currently stands, the notion of CSR will be confined to a niche sector of the economy, having only a limited influence on the day-to-day activities and long-term strategy of global corporations."

" Is there a "market for virtue"? If so, what can it do, and what can it not do to improve our world? In his incisive new book, David Vogel takes aim at these questions and the now-fashionable claim that there is a business case for corporate social responsibility (CSR). He concludes that there is no business case that can be generalized to all firms per se, but there is a political case for broadening what we mean by that much-used term. [...] Vogel's work is rich in detail, as he reviews the experiences of companies such as Nike, Ford, and Shell, social labels such as Rugmark, and NGO strategies like consumer boycotts and divestment. [...] Vogel situates his work in what he would like to appear to be the reasonable middle between critics on the right, such as Arthur Laffer, who argue that CSR is actually irresponsible to shareholders, as well as risk-averse, and those on the left, such as David Korten, who argue that profit-driven corporations are constrained from doing the right thing. [...] Vogel's rhetorical style, however, on occasion, clouds his actual position. [...] building a political and economic marketplace in which worker standards, environmental regard, and human rights protection have a far higher profile in democratic deliberation and decision making than they do today. This, I think, is Vogel's real project. In engaging it with intelligence, precision, and craft, he has advanced significantly the debate on corporate social responsibility by setting the direction in which it needs to go."

Table of Contents of The Market for Virtue