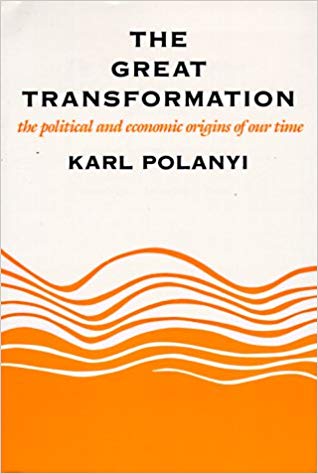 In this classic work of economic history and social theory, Karl Polanyi analyzes the economic and social changes brought about by the "great transformation" of the Industrial Revolution. The Great Transformation explains not only the deficiencies of the self-regulating market, but the potentially dire social consequences of untempered market capitalism.

According to the Wikipedia page on The Great Transformation

"it deals with the social and political upheavals that took place in England during the rise of the market economy. Polanyi contends that the modern market economy and the modern nation-state should be understood not as discrete elements but as the single human invention he calls the 'Market Society'. A distinguishing characteristic of the 'Market Society' is that humanity's economic mentalities have been changed. Prior to the great transformation, people based their economies on reciprocity and redistribution across personal and communal relationships. As a consequence of industrialization and increasing state influence, competitive markets were created that undermined these previous social tendencies, replacing them with formal institutions that aimed to promote a self-regulating market economy. The expansion of capitalist institutions with an economically liberal mindset not only changed laws but also fundamentally altered humankind's economic relations; prior to the great transformation, markets played a very minor role in human affairs and were not even capable of setting prices because of their diminutive size. It was only after industrialization and the onset of greater state control over newly created market institutions that the myth of human nature's propensity toward rational free trade became widespread. However, Polanyi asserts instead that man's economy, as a rule, is submerged in his social relationships,' and he therefore proposes an alternative ethnographic economic approach called 'substantivism', in opposition to 'formalism', both terms coined by Polanyi."

The wikipedia entry then discusses in more detail the general argument of The Great Transformation, Polanyi's sketch of the situation before market society, support for the book and criticisms on the book.

"Two crucial differences between Polanyi’s analysis and that of most other historians of the economy and of the thought of the nineteenth century are so important to understanding his work that they must be made explicit even before their role in the larger argument is recounted. Polanyi differentiated between economic systems in which there were markets and the 'starkly utopian' self-regulating market (SRM) of the nineteenth century. Markets are places or networks in which goods are bought and sold; they are human interactions organized by price, quality, and quantity of traded goods and services. The SRM was a society-wide system of markets in which all inputs into the substantive processes of production and distribution were for sale and in which output was distributed solely in exchange for earnings from sales of inputs. The second crucially distinct feature of Polanyi’s analysis is his argument that the SRM could not survive — not because of the distributional consequences that play the major role in Marx’s explanation of the inevitable collapse of capitalism — but because the starkly utopian nature of the SRM gave rise to a spontaneous counter movement, even among those enjoying increased material prosperity. Society is vital to humans as social animals, and the SRM was inconsistent with a sustainable society. [...] The framework that Polanyi provided for understanding the collapse of nineteenth century civilization and the rise of the troubled twentieth remains powerful. Having said this, however, it must also be said that The Great Transformation contains some major errors of omission and interpretation. [...] Polanyi created a way of thinking about economies and societies that has had substantial impact on economic history, anthropology, and the study of the ancient Mediterranean. The Great Transformation remains important as a highly original contribution to the understanding of the Western past; it has been and is important in methodological debates in the social sciences. Beyond that, as the double movement continues, the book is likely to remain one of the best guides available to what brought us to where we are."

"Karl Polanyi's The Great Transformation (1944), published in the same year as Friedrich Hayek's The Road to Serfdom, is as sacred a text to the opponents of free-market capitalism as Hayek's is to the Chicago School. To his devotees, Polanyi showed the free market to be the enemy of humanity in The Great Transformation. [...] The Great Transformation has attained the status of a classic in branches of sociology, political science, and anthropology. [...] Yet in economics the work is unknown — or, when discussed, derided. [...] The great puzzle of Polanyi's book is thus its enduring allure, given the disconnect between his predictions and modern realities. The fans of Polanyi seem to be responding to his general belief that markets corrupt societies, and his assertion that free market economies are a shocking recent departure from a socially harmonious past. His great criticism is that by breaking the social connections between individuals, by reducing everyone to an isolated atom, markets create inequalities that previously did not exist. But Polanyi was no better a historian than a prognosticator. Indeed, the more we learn of history, the more evident it is that the free market was not an 18th-century innovation, but one of mankind's oldest social institutions. [...] It is probably true, as Polanyi asserts, that hunter-gatherer and shifting cultivation societies were more egalitarian than later market societies. But he hopelessly romanticizes that world [...] Polanyi's popularity thus represents the triumph of yearning and romanticism over science in disciplines like sociology."

"It is hardly surprising that the neo-conservative New York Sun chose to publish a reconsideration of Karl Polanyi's, The Great Transformation, written by Greg Clark, a U.C. Davis economic historian. [...] Following the old maxim that the best defense is a good offense, Clark’s strategy is to change the subject by attacking critics of the free market as wooly headed, naïve, and in energetic denial of 'historical reality.' [...] Clark goes on from there to denounce a straw man version of Polanyi’s argument. [...] Joseph Stiglitz, the 2001 Nobel prize winning economist [...] insists that 'Economic science and economic history have come to recognize the validity of Polanyi’s key contentions.' [...] Polanyi insists - and Stiglitz and many others agree - that this idea of a 'free market' society is utopian. It is utopian because it assumes that humans can once and for all be released from all forms of social regulation and legal coercion and that the market forces of supply and demand will spontaneously and freely produce optimal outcomes."

A 6-minute summary video of the book

According to Wikipedia the speaker in this video, "Jerry Michalski, is an American technology consultant. He is the former managing editor of Release 1.0, a technology newsletter. He is the founder of Sociate.com and [think tank] ReX (Relationship Economy eXpedition)."

Special Issue on the Book 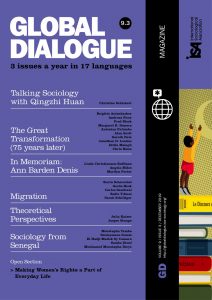 Together with the International Karl Polanyi Society, the International Sociological Association organized a symposium to celebrate the 75th anniversary of The Great Transformation. This resulted in short articles included in the December 2019 issue of their magazine Global Dialogue:

See also our overview of books on Polanyi's work
.
.

Table of Contents of The Great Transformation

Part One: The International System 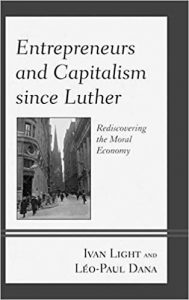 Entrepreneurs and Capitalism since Luther: Rediscovering the Moral Economy (2020) 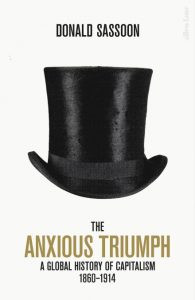