By Leigh Phillips and Michal Rozworski 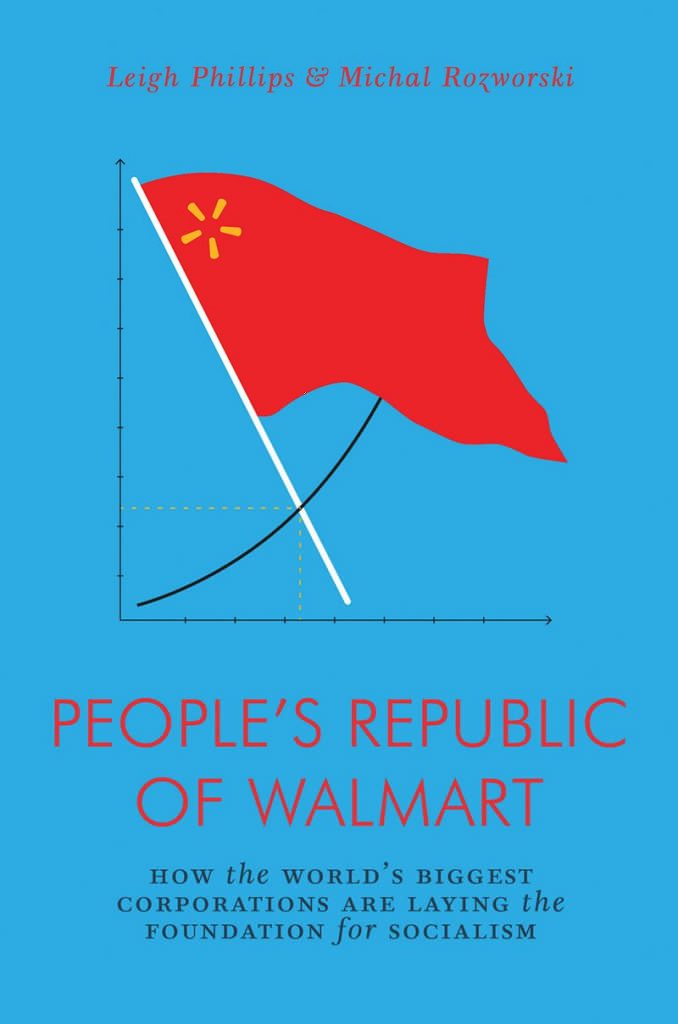 Since the demise of the USSR, the mantle of the largest planned economies in the world has been taken up by the likes of Walmart, Amazon and other multinational corporations. For the left and the right, major multinational companies are held up as the ultimate expressions of free-market capitalism. Their remarkable success appears to vindicate the old idea that modern society is too complex to be subjected to a plan.

And yet, as Leigh Phillips and Michal Rozworski argue in People’s Republic of Walmart, much of the economy of the West is centrally planned at present. Not only is planning on vast scales possible, we already have it and it works. The real question is whether planning can be democratic. Can it be transformed to work for us?

An engaging, polemical romp through economic theory, computational complexity, and the history of planning, People’s Republic of Walmart revives the conversation about how society can extend democratic decision-making to all economic matters. With the advances in information technology in recent decades and the emergence of globe-straddling collective enterprises, democratic planning in the interest of all humanity is more important and closer to attainment than ever before.

"Ludwig von Mises and Friedrich von Hayek both argued that free markets act as signalling devices, providing information about consumer choices and preferences in real time through the rise and fall of prices. State planners, by contrast, could never access the volumes of information required to gauge the demands of a population. [...] The existence of private companies has long been a rebuke to free marketeers, exposing the flaw of the argument that markets could ever be perfectly competitive. If they were, firms – those islands of cooperation where individuals enter into collaborative partnerships with one another – wouldn’t exist. [...] Phillips and Rozworski concede an admiration for Walmart akin to an epidemiologist appraising the genius of a drug-resistant strain of tuberculosis. Could the company – an exemplar of capitalist planning – be turned into something altogether more radical? [...] The People’s Republic of Walmart is a timely provocation. In the age of big data, challenging orthodoxies about planning is more necessary than ever. [...] Rather than offer concrete solutions, their book challenges an economic orthodoxy that has too often denied the existence of planning in the private sector. [...] Too many politicians have lost faith in the capacity of the state to manage or innovate. Philips and Rozworski’s book is a timely exhortation to rethink the wisdom that markets always do it better."

"the authors of The People's Republic of Walmart [...] believe that a wholly planned, publicly owned economy is both possible and desirable. Indeed, they believe it is essential. It is rare to hear the case for workers seizing the full means of production so openly, even by leftist writers. There is nothing diluted about the Marxism of Leigh Phillips and Michal Rozworski, a journalist and a ‘union researcher’ respectively. Some of the text feels as if it has been ripped straight out of Das Kapital. [...] The authors have no doubt that capitalism must be overthrown. The charge sheet is long. [...] No evidence is presented to show that these problems were less prevalent before capitalism took hold, nor that they were less common in planned economies. [...] They see the calculation problem as difficult but not insurmountable, and offer two reasons to hope that next time will be different: democratisation and technology. [...] Walmart is not an economy but a single business in competition with others. The supply chain the authors describe is neither an economy nor a single business, and it is quite obviously not a state monopoly. [...] For a book which argues that a democratically planned economy is a realistic possibility, it is remarkably thin on practical detail. The authors offer only the barest sketch of what such a society would look like. They are clear about what they do not want–private profit, unaccountable institutions, state force, negative externalities, central (as opposed to democratic) planning – but descend into waffle when trying to explain what they do want. [...] Two flaws in Phillips and Rozworski's analysis stand out. First, they treat the socialist calculation problem as a mathematical conundrum that could be solved if the government had enough data and sufficient computer power. Strictly speaking, they are challenging Hayek's‘ knowledge problem’, not Mises' calculation problem. Second, Phillips and Rozworski have a binary, all‐or‐nothing view of the market: either it allocates resources more efficiently, in which case every sector should be marketised and every businesses should have an internal market, or it allocates resources less efficiently, in which case every sector should be nationalised. Since almost nobody believes in full marketisation, they conclude that planning must be superior and that anyone who believes in a mixed economy is a hypocrite. [...] The People's Republic of Walmart is a provocative book, but its ideas should be left in the realms of theory."

"Not only is there no internal market within the Walmart enterprise, but the planning that makes the company so efficient, so careful in its management of costs and so profitable, is based on a system of logistics that requires deliberate collaboration, trust and transparency – rather than competition – for results. [...] There is a valuable lesson in this book for those advocates of ever greater privatization in Britain’s hospitals and local government: no successful capitalist company operates an internal market. Those that do are doomed. [...] This book is a powerful plea for the revival of democratic, accountable and participatory planning. The authors urge readers to a wider understanding of developments in the technology of logistics. With the help of these management tools, Walmart provides a model of how social and economic planning can be undertaken collaboratively and efficiently – though the profit motive will need to be effectively replaced by a similarly enticing call to action. [...] People’s Republic of Walmart is fast-paced and provocative. It offers readers a refreshing perspective on today’s highly planned capitalist enterprises, and the prospect of a new form of democratic, transparent and socialist planning."

"Most people associate planned economies with the Soviet Union or China [...], both of which certainly had their fair share of economic difficulties. Philips and Rozworski are aware of this, and unlike some on the left, are more than willing to admit that the command economies of previous 'socialist states' either ended in disaster or made the gradual transition to a type of state-capitalism. Planned economies, however, have a much deeper history than just the Soviet Union. [...] Philips and Rozworski realize that while capitalism cannot possibly be prepared to handle the biggest threats to human existence — ecological crises, infections that are totally resistant to antibiotics — a paradigm shift towards a completely planned economy is not immediately possible. Market socialism, the idea that businesses should be controlled by workers in a market economy, would have to serve as a link between the transition from a capitalist economy to a socialist economy."

"In their irreverent and lucid new book, The People’s Republic of Walmart, they argue that the evidence for the usefulness of planning can be found, not in discredited experiments like the USSR, but among the titans and icons of postmodern capitalism like Walmart, Amazon and Shell. These are, they point out gleefully, command and control economies on the scale of the USSR in its prime, and they seem to work just fine, if you can ignore their toxic impacts on the environment and the lives of workers and consumers. The authors believe that it is not enough to scorn Walmart and other mega-firms for their evil impacts; anyone who wants a better world needs to learn from them. This provocative and persuasive book is designed for at least two audiences: Already committed socialists who will be interested in the fine-grain history of technical disputes within political economy and encouraged by the suggestion that economic democracy may still be thinkable; and general readers (especially the young voters who have been driving pro-socialist polling results across North America currently) who want to take another look at the socialist project in the long shadow of our current capitalist crises of environment and social equity. Both audiences will find much here to provoke thought, and even hope. All of this is presented in good-humoured, non-rhetorical language."

Peter Frase on In These Times wrote:

"What would an alternative system look like? That is left undefined. Phillips and Rozworski are humble enough not to provide an answer, only offering that what “democratic planning will look like is a question a new generation of progressive economists needs to begin today to discuss.” Many possible contradictions, however, lurk beneath this question. When the workforce’s democratic demand for power within the workplace conflicts with the needs of efficient socialist production, what wins out? At its worst, a socialized economy could look like one in which the exploitation of labor continues unchanged. The boss might now be 'us' in some collective form, but what comfort is that if life on the job is as grueling as ever? Such issues of workplace democracy are largely pushed aside. Phillips and Rozworski offer a technocratic vision, one that owes something to Marx but perhaps just as much to the top-down socialism of the British Fabian Society of playwright George Bernard Shaw. Shaw and his fellow intellectuals viewed socialism as something to be brought to the masses by educated elites—themselves, for instance—through a process of gradual reform. Phillips and Rozworski do recognize the potential for democratized economic planning to devolve into a dystopia of endless meetings, yet their only solution is to insist that 'we’ll have to give up some decision-making power—whether to experts, (elected) managers or representatives.' We are left to hope, fingers crossed, that a balance can somehow be struck between the imperatives of democracy, efficiency and bureaucracy. At best, this vision amounts to a halfway house on the way to liberation."

Video from the Book Launch

Table of Contents of People's Republic of Walmart

About Michal Rozworski and Leigh Phillips

Michal Rozworski is a union researcher and writer based in Vancouver, Canada. He holds graduate degrees in economics and philosophy and publishes frequently on political economy.

Leigh Phillips is a science writer whose work has appeared in Nature, Science, the New Scientist and the Guardian, amongst other publications. 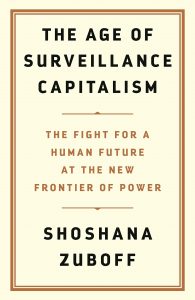 The Age of Surveillance Capitalism; The Fight for a Human Future at the New Frontier of Power (2019)