Moral Markets; The Critical Role of Values in the Economy (2008) 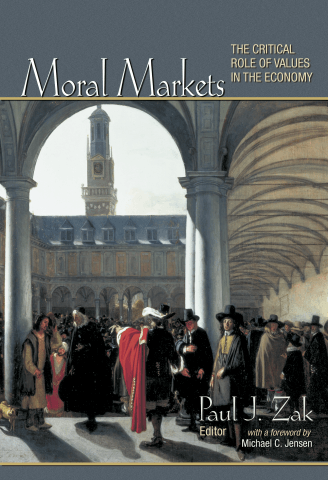 "Like nature itself, modern economic life is driven by relentless competition and unbridled selfishness. Or is it? Drawing on converging evidence from neuroscience, social science, biology, law, and philosophy, Moral Markets; The Critical Role of Values in the Economy makes the case that modern market exchange works only because most people, most of the time, act virtuously. Competition and greed are certainly part of economics, but Moral Markets shows how the rules of market exchange have evolved to promote moral behavior and how exchange itself may make us more virtuous. Examining the biological basis of economic morality, tracing the connections between morality and markets, and exploring the profound implications of both, Moral Markets provides a surprising and fundamentally new view of economics--one that also reconnects the field to Adam Smith's position that morality has a biological basis. Moral Markets is the result of an extensive collaboration between leading social and natural scientists."

"This book review situates Moral Markets within the larger debate over human nature generally, and shows how, through the presentation of biological evidence and evolutionary theory, Moral Markets repudiates the Homo economicus model and supports the Aristotelian position that human beings are fundamentally moral creatures. After demonstrating that free markets cannot thrive in the absence of virtue, Moral Markets concludes that free markets must generally be populated by virtuous actors. This book review asks whether another conclusion might be drawn: that the free markets of today lack a critical mass of virtuous actors, hence the current spate of corporate scandals and economic woes."

"Overall, this book is highly recommended as an excellent introduction to new scholarship on the biological origins of ethical behavior and its implications for economics. It is accessible and valuable for non-specialists and will have something of interest to offer even those already schooled in the topic."

"This collection of literature reviews, essays, and original research from the fields of primatology, philosophy, law, and economics grapples with the vexed relationship of values and markets, but doesn’t quite succeed in addressing it. While there is plenty of wisdom scattered across the different contributions, as a book it fails in its inter-disciplinary task of integrating these nuggets, and it fails also to include all the disciplines which would seem to be relevant sources of insight. Moral Markets is dominated by economists’ concern that they are missing something important – they have a ‘values gap’ in their models. [...] The sources and nature of the contributions largely reflects mainstream economists’ preference for incremental change to their models that they can be comfortable with, rather than a real openness to inter-disciplinary perspectives."

The book includes contributions by

PART I: PHILOSOPHICAL FOUNDATIONS OF VALUES

PART III: THE EVOLUTION OF VALUES AND SOCIETY

PART IV: VALUES AND THE LAW

PART V: VALUES AND THE ECONOMY