Goliath: The 100-Year War Between Monopoly Power and Democracy (2019) 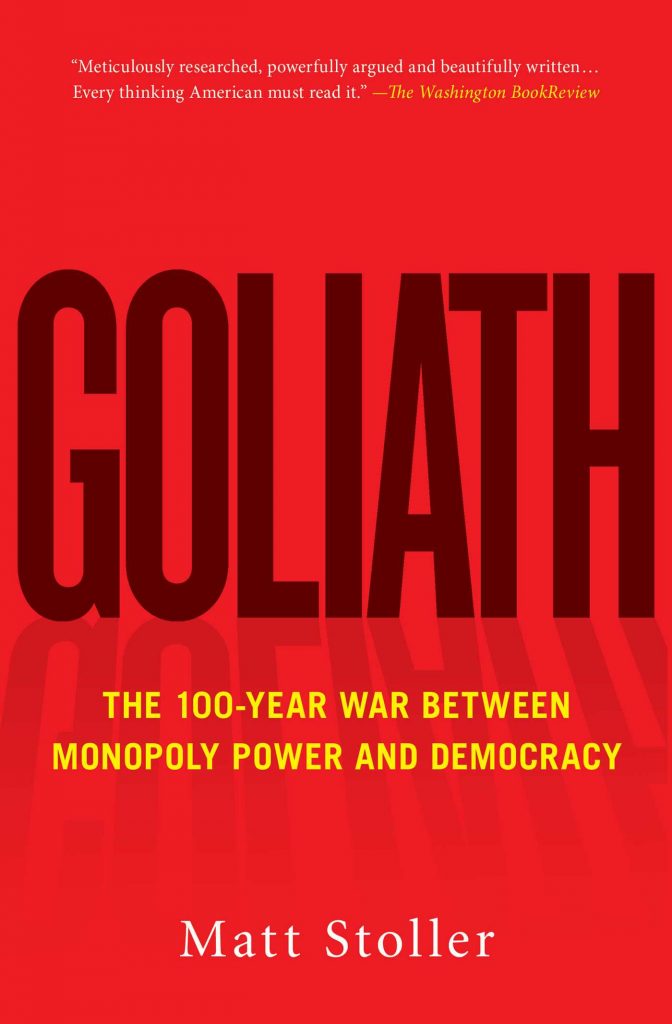 A startling look at how concentrated financial power and consumerism transformed American politics, resulting in the emergence of populism and authoritarianism, the fall of the Democratic Party—while also providing the steps needed to create a new democracy.

Americans once had a coherent and clear understanding of political tyranny, one crafted by Thomas Jefferson and updated for the industrial age by Louis Brandeis. A concentration of power, whether in the hands of a military dictator or a JP Morgan, was understood as autocratic and dangerous to individual liberty and democracy. This idea stretched back to the country’s founding. In the 1930s, people observed that the Great Depression was caused by financial concentration in the hands of a few whose misuse of their power induced a financial collapse. They drew on this tradition to craft the New Deal.

In Goliath, Matt Stoller explains how authoritarianism and populism have returned to American politics for the first time in eighty years, as the outcome of the 2016 election shook our faith in democratic institutions. It has brought to the fore dangerous forces that many modern Americans never even knew existed. Today’s bitter recriminations and panic represent more than just fear of the future, they reflect a basic confusion about what is happening and the historical backstory that brought us to this moment.

The true effects of populism, a shrinking middle class, and concentrated financial wealth are only just beginning to manifest themselves under the current administrations. The lessons of Stoller’s study will only grow more relevant as time passes. Building upon his viral article in The Atlantic, “How the Democrats Killed Their Populist Soul,” Stoller illustrates in rich detail how we arrived at this tenuous moment, and the steps we must take to create a new democracy.

"Goliath is overlong in places, at times repetitive, and key figures are not always vividly portrayed. But Stoller’s point remains vital. And his book complements the work of Lina Khan, a former colleague of his at the Open Markets Institute, who, in a viral Yale Law Journal article in 2017, forensically exposed Amazon’s many monopolistic practices."

Lloyd Green on The Guardian wrote:

"Stoller strafes targets across political and ideological spectrums. In 600-plus pages, he attacks John Kenneth Galbraith and Richard Hofstadter, mid-20th-century liberal academics and icons, for their approval of concentrated economic power. Goliath turns its guns on the McGovern-Fraser Commission, formed by Democrats in the aftermath of their 1968 loss to Nixon. [...] Goliath also does a deep-dive on the rise of what has become known as the Chicago School and market conservatism. [...] Unfortunately, Goliath comes up short in addressing the intersection between culture and economics."

"Stoller’s argument is inherently conservative. He looks back with nostalgia on an America of small shops, local farm production and minimized state power. [...] Stoller arranges this potentially dry story of anti-monopoly politics into a series of dramatic set pieces. From street brawls to legislative legerdemain, from fiery rhetoric to intellectual double-dealing, the book is full of virtuous populists defending the little guy against dastardly monopolists and their enablers, the “paranoid red-baiting corporate right” and the “corporate left.” Readers will learn fascinating details about the inner workings of New Deal policies, banking regulation, the conglomerate movement and the rise of the Chicago school and its intellectual assault on antitrust law. Full of righteous and riveting writing, Goliath provides an important overview of a vital history. [...] Yet as an argument about political economy, the book relies on melodrama and caricature, leaving much asserted but little proved. [...] Readers already disposed to the premise will cheer, but those seeking to understand why monopolies grew and retained such political power will be left confused. Stoller’s interpretation of anti-monopoly politics rests on a specific understanding of what political scientists call the horseshoe theory: that the extreme left and the extreme right are not diametrically opposed, but share much in common and will eventually meet. In Goliath, the convergence is between the plutocratic, laissez-faire right and the socialist left, both of which accept large, powerful institutions. [...] The result is that Goliath is punditry posing as history. Stoller writes with the cocksure confidence of someone who believes he has uncovered the secret origins of America’s woes. If only this hidden story were revealed, Stoller claims, we could fix inequality and “restore our democracy.” Yet history is not a self-righteous morality play, and it cannot boil down to heroes and villains. [...] To achieve real reform, we must do more than recycle 100-year-old platitudes about shopkeepers and family farms, and rescue long-dead Texas congressmen from obscurity."

"For Stoller, a fellow at the Open Markets Institute, the 2008–10 swindle was the culmination of a decades-long surrender to corporate power in America facilitated by the abandonment of the antitrust policies and norms instituted during the New Deal. [...] Goliath is both an effort to provide this history and to inspire readers to join a new anti-monopoly movement. [...] in consigning the rich body of anti-capitalist critique to the useless lump of “inevitabilism,” Stoller misses the chance to actually answer the question that purportedly prompted him to write Goliath: Why did the US government bail out the bankers instead of regular folks? [...] Stoller’s dismissiveness of the value of an anti-capitalist critique also causes him to write off the social movements of the 1970s as a bunch of misguided, affluent “babies." [...] Finally, Stoller’s insistence on the irrelevance of an anti-capitalist critique prevents him from asking hard questions of his own narrative, such as: Why were antitrust principles, despite showing strong results and being enshrined in US law, already coming under attack by the 1950s, and ultimately incapable of constraining the power of capital?"

"The greatest strength of the book is Stoller’s wonderful historical telling of the fight between monopoly power and democracy. Yet the book also has three primary weaknesses. First, Stoller’s ad hominem attempts to disempower those whose arguments he disagrees with by countlessly calling right-wing and left-wing intellectuals ‘elitist,’ ‘smug,’ ‘eggheads,’ etc. takes away from Stoller’s historical story. The ad hominem rhetoric subtracts from Stoller’s accomplishment of revealing the historical activities of antimonopolists. Second, and more important, the reason the Chicago School dominates antitrust thinking, and Bork’s Antitrust Paradox (1978), the most widely cited work on the subject, is because there is power in the argument. Antitrust policy is paradoxical because capitalism is contradictory. Stoller does not handle this well, but presents the Chicago School as corporate cranks. Third, characterizing Mills, Hofstadter and Galbraith as procoporate and promonopoly is highly problematic. In addition, conflating the right and left on corporate power is very misleading"

"Goliath delivers. By carefully recounting anti-monopoly’s contributions to liberty, democracy, and prosperity in the 20th century, Stoller teaches his readers how to perform anti-monopoly inquiry themselves. We learn how to see and analyze economic power—how it’s created, circulates, and corrupts—and how to oppose, disentrench, and prevent it from returning. These are invaluable and timely lessons, as the center-left mobilizes to reverse authoritarianism. This is a lot to accomplish. Even so, Goliath has two blind spots, which limit its ambitions: race and liberal corporatism. Both warrant historical criticism, so anti-monopoly’s teachings can be more relevant today."

Gabriel Wienant on The Nation wrote:

"For Stoller, all of American history—and much of world history—has been defined by a struggle between monopoly and democracy. [...] What’s so telling about this narrative is not only the fact that the golden age of competition that Stoller wishes to restore is the very same period in which great, vertically integrated oligopolies ruled the economy in coordination with one another, labor unions, and the state; it is also that his expansive view of economic power still can’t find a place for class conflict—which, although invisible to Stoller, was often the engine of downward redistribution in the midcentury boom. Because he does not grasp how the fundamental antagonism between labor and capital underlies other forms of economic rivalry, Stoller misunderstands the nature of the New Deal and the legacy it leaves us. As a result, his book offers us a useful guide to some of the ills of concentrated market power today but does not ultimately come to terms with their real origin or present any viable political response."

Discussion with Stoller about Goliath 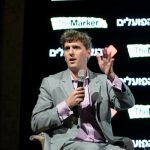 Matt Stoller is a Fellow at the Open Markets Institute. Previously, he was a Senior Policy Advisor and Budget Analyst to the Senate Budget Committee. He also worked in the US House of Representatives on financial services policy, including Dodd-Frank, the Federal Reserve, and the foreclosure crisis. He has written for The New York Times, The Washington Post, The New Republic, Vice, and Salon. He lives in Washington, DC. Goliath is his first book.

Table of Contents of Goliath 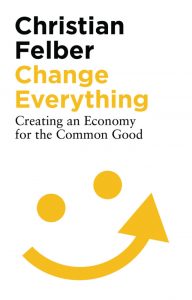 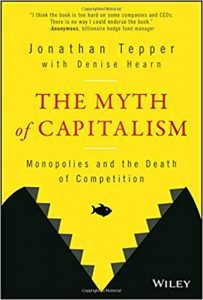 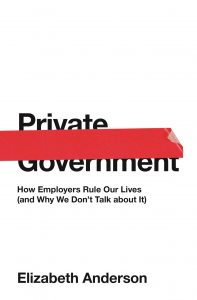