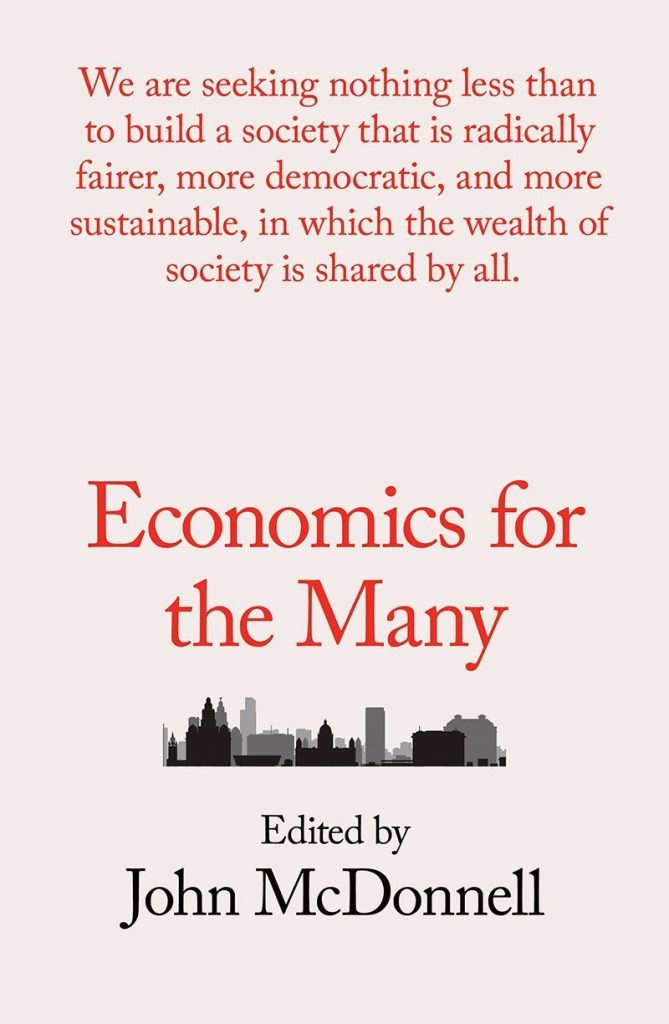 Big challenges lie ahead for our society: the rise of automation and the threat of catastrophic climate change. But so, too, do the huge possibilities presented by new technology and better ways of organising our economy in the wake of neoliberalism’s failure. With the election of Jeremy Corbyn as Labour leader, and the extraordinary turnaround in Labour’s fortunes in the 2017 election, we have a real opportunity to build an economy in Britain that is radically fairer, radically more democratic, and radically more sustainable. But we need the right ideas and strategies if we’re going to get there.

Economics for the Many, edited and with an introduction by Shadow Chancellor of the Exchequer John McDonnell, features contributions from the participants in his New Economics conferences, including Barry Gardiner, Ann Pettifor, Prem Sikka, and Guy Standing. It covers topics from housing, public ownership, and fairer international trading systems to industrial policy for the twenty-first century and how to tackle tax avoidance and regional imbalances. Together, the essays in this volume lay out a vision for a new economics, one that works for the many, not the few.

"Economics for the Many - a new collection of essays edited by Labour’s shadow chancellor John McDonnell - is simultaneously an intervention into these realities and a programmatic sketch of radical left thinking for the twenty-first century. As its title suggests, the book is also an effort to reclaim economics for the Left, an easily stated though admittedly daunting task amid neoliberalism’s persistence as the economic lingua franca. Simultaneously localist and internationalist in scope - and encompassing everything from trade, the environment, and alternative models of firm ownership to fiscal policy and the challenges posed by platform monopolies and the data economy - the essays are accessible and minimally abstract, both in their concern with the practicalities of policy and their awareness of the difficulties of implementation in the face of political constraints. This, however, makes them no less innovative. [...] If a single theme unites the book’s various essays it is, simply stated, a belief in democracy as a moral but also a practical necessity."

Mike Haynes on Revolutionary Socialism in the 21st Century wrote:

"Economics for the Many is the book Theresa May misquoted in the House of Commons to ridicule Jeremy Corbyn and John McDonnell, the shadow chancellor. ‘Endorsed by more lies from the UK Prime Minister’ is not a bad advertising slogan. But is it worth buying and reading? The answer is yes. Edited and introduced by McDonnell, it has sixteen short and often sharp chapters that take us through what is wrong with modern Britain. Only one is by a politician, Barry Gardiner MP – the shadow trade secretary – it is one of the few irritating chapters. But it is also a profoundly unsatisfactory book. This is partly because of what it leaves out: there are no chapters devoted to issues like health, education, social welfare and the specific policies needed. But it is also because there is little attempt in the areas that are discussed to show in any detail what viable policies might look like. This points to the deep problems that exist in Corbyn’s Labour and it is helpful to read it to see these too. This is not a manifesto for revolution. The word socialism is used a few times (it did not appear in the 2017 Corbyn manifesto at all). But the general aspirations are vague – 'radically fairer, more democratic, and more sustainable in which the wealth of society… shared by all'. Who could disagree?"

About the New Economics Conference

A video about the British Labour Party's New Economics Conference, which is the origin of this book:

Table of Contents of Economics for the Many