Economics as Applied Ethics: Fact and Value in Economic Policy (2017)

This second edition of Economics as Applied Ethics - the first edition appeared in 2011 - has been revised and updated to continue its focus on the link between ethics and economic policy analysis, whilst ensuring that perspectives addressing the moral limits of the market, latest behavioral economics literature, and the changes in inequality over the years are included. Basic philosophical concepts are systematically described, followed by conventional welfare economic theory and policy, and applications to some topical economic problems such as income distribution and sustainable development.

Advantages of the book:

Wilfred Beckerman is an Emeritus Fellow of Balliol College, Oxford University, England, and is now an Honorary Visiting Professor in the Department of Economics at University College London. He has been a Member of the Royal Commission on Environmental Pollution; the Economic Advisor to the President of the British Board of Trade; and Head of Division at the Organisation of Economic Cooperation and Development. He has also been a Visiting Professor at universities in France and the U.S.A., and a consultant to the World Bank, the United Nations, and the International Labour Organization.

"Beckerman’s book is definitely not aimed at the protesters , and does not provide ammunition for them. His approach is grounded firmly in the mainstream of economic thinking, and is an apologia for cost benefit analysis (CBA), a scheme opublic decision making that demands monetary qualification of the desirable and undesirable impact of policies. The largest part of the book is a balanced assessment of the many difficulties in undertaking such an assessment. But in the end, he argues that ‘for all its numerous deficiencies, there is still a strong case for using the tools of cost benefit analysis.’ [...] Beckerman’s book explores the relationship of CBA to both economics and philosophy. There is an elective affinity between the structure of modern economic theory and the dominant approaches of modern political philosophy. That economics is based on assumptions of rational individual choice, competitive markets, and maximising agents. That philosophy is also individualistic and defines justice principally in terms of the structure of rights — particularly property rights — conferred on individuals."

Table of Contents of Economics as Applied Ethics 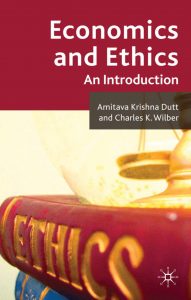 Economics and Ethics; An Introduction (2010) 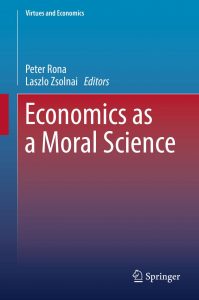 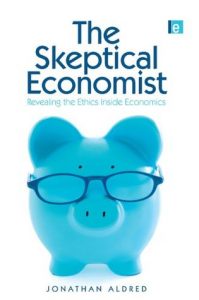 The Skeptical Economist; Revealing the Ethics Inside Economics (2009)