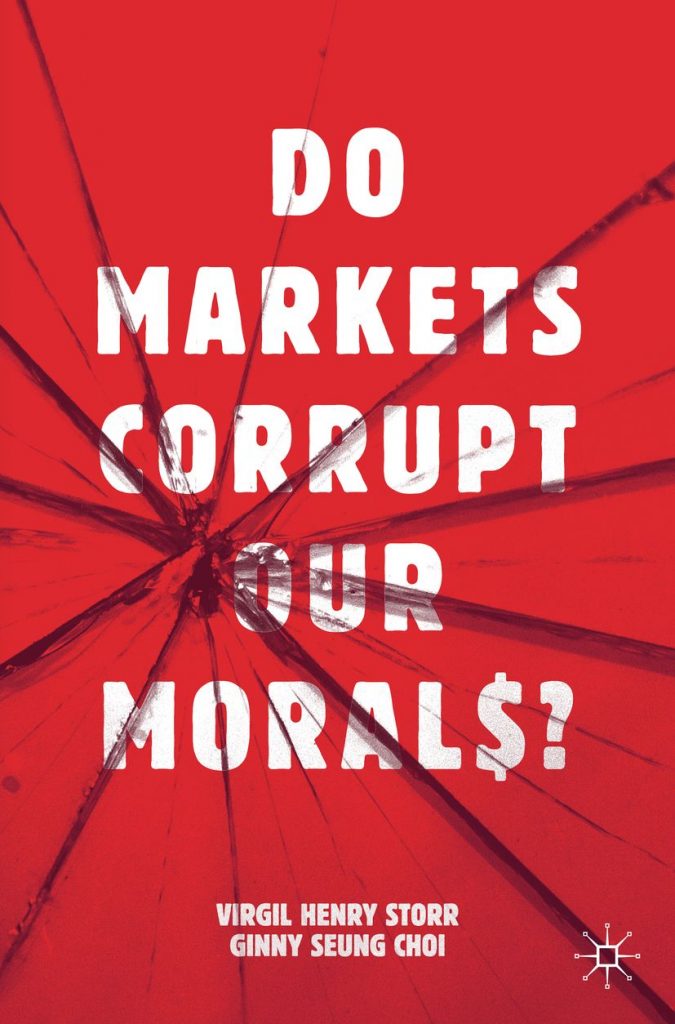 The most damning criticism of markets is that they are morally corrupting. As we increasingly engage in market activity, the more likely we are to become selfish, corrupt, rapacious and debased. Even Adam Smith, who famously celebrated markets, believed that there were moral costs associated with life in market societies. Do Markets Corrupt Our Morals? explores whether or not engaging in market activities is morally corrupting.

Storr and Choi demonstrate that people in market societies are wealthier, healthier, happier and better connected than those in societies where markets are more restricted. More provocatively, they explain that successful markets require and produce virtuous participants. Markets serve as moral spaces that both rely on and reward their participants for being virtuous. Rather than harming individuals morally, the market is an arena where individuals are encouraged to be their best moral selves.

Do Markets Corrupt Our Morals? invites us to reassess the claim that markets corrupt our morals.

"Do Markets Corrupt Our Morals? is a book-length rebuttal to longstanding assertions that they do. [...] Virgil Storr and Ginny Choi discuss some of the conclusions reached by famous critics of markets, including Aristotle, Thomas Aquinas, Jean-Jacques Rousseau and Karl Marx, as well as more recent communitarian critics, particularly Michael Sandel. Then in contrast, they discuss many of the rebuttal arguments that have been offered against such conclusions, including those by Montesquieu, Voltaire, Adam Smith, Thomas Paine, Phillip Wicksteed, Deirdre McCloskey, Milton Friedman, Henry Hazlitt, and Friedrich Hayek. [...] the core new contribution Storr and Choi make. They examine in great detail the available evidence allowing comparisons to be drawn between the moral consequences of market and those of nonmarket economies (and there is far more evidence than I was aware of before reading the book). Those who believe markets cause moral erosion as an article of faith will find substantial evidence that will challenge that faith, if not overwhelm it. [...] I agree with Storr and Choi’s conclusion. However, I do not entirely agree with their assertion of the need to directly rebut the moral failings critics see in markets in a way that those critics would accept. That is because critics rely on multiple errors in drawing their conclusions, and addressing their concerns as they frame them, requires accepting their premises as if they are true. I feel that focusing on improving their understanding, which would change their conclusions, may be more productive. That is revealed in the discussion of Aristotle, Aquinas, Rousseau and Marx as market critics, which primarily reveals that none of them fully understood markets. [...] That said, Do Markets Corrupt Our Morals? deserves reading. [...] it provides extensive empirical evidence that critics’ conclusions are in error, for those open to correcting their misunderstanding."

"In a new and timely book, Do Markets Corrupt Our Morals (2019), Dr. Virgil Henry Storr and Dr. Ginny Seung Choi set up court to address the claim that buying, selling, and transacting in general in a market society corrupt our moral character. [...] In this book, the authors provide a response to – and where possible, try to refute – this negative criticism of markets. [...] The authors partially succeed in this task. They show that markets require and promote the bourgeois virtues, but they admit, too, that there are kinds of virtue other than the bougeois. [...] As a whole, there is plenty to admire in Do Markets Corrupt Our Morals? Throughout the text, Storr and Choi blend stories from real-life settings (Bahamiam slavery, Estonia, Korea), vignettes from works of famous authors (Aesop, Shakespeare, Dickens), and the use of social-scientific methodology (survey data, regression analysis) to defend markets. This blended approach gives their text a broad appeal. [...] The criticisms presented are so broad and various, in fact, that they could not possibly be said to have responded to them all. Combined with extensive bibliographies of relevant literature at the end of every chapter, their approach makes this book useful and informative.In the end, however, readers are justified in wondering whether there is really anything new here. Moreover, the authors’ defense of the bourgeois virtues does not entirely eliminate the longing for the glories attaching to virtues of a different sort, which, although they do not admit it, commerce simply undermines, at least according to Montesquieu and Smith. Perhaps this is the unspoken and real moral cost of markets? In sum, the evidence may have changed form, but the arguments marshaled by Storr and Choi do not advance readers past Montesquieu’s classic doux commerce thesis that markets make us more humane."

"the authors offer a thoughtful intellectual history of the original indictments: that markets are morally corrupt and corrupting.They also recount and assess prior defenses of markets. Storr and Choi’s argument builds along two lines: first, that the greater wealth, health, happiness, and connections of people in market societies support a better state of living, a conclusion, which for the authors, carries moral weight; and second, that virtue supports markets, and markets, in turn, reward virtue [...] At the same time, however, the authors distance their findings from the debate on the existence of noxious markets, in which moral censure is placed on trade in certain goods and services. Storr and Choi believe that their findings hold regardless of the possibility of noxious markets. [...] Do Markets Corrupt Our Morals? concludes with an appendix laying out the authors’ methodology, data, and data analysis. A critical admission about the limits of the empirical methodology is noted: outwardly virtuous behavior can be measured, but intention often eludes empirics. An uptick in good behavior does not necessarily correlate with rising virtue. Seemingly virtuous behavior could sky-rocket, while virtue itself takes a hit. Among the contributions made by Do Markets Corrupt Our Morals? are its literature reviews. Readers will find useful, though sometimes repetitive, summaries of arguments in the debates about markets and morality. The authors argue convincingly that popular defenses of markets fail in addressing the core worry and charge that markets corrupt morals. At the same time, the authors display appropriate caution in estimating their own defense of markets, from the admission in the preface that their arguments and evidence are“suggestive rather than conclusive”(vi) to their caveats in the appendix. Nevertheless, the book promises to be an essential text for future scholarship on virtue and the market. Do Markets Corrupt Our Morals? not only encapsulates the debate, it drives it forward."

"The book has both theoretical and empirical elements. The primary thrust of the theoretical argument is to establish that markets create space for, and actively reward, moral action. That is, far from accepting the 'mischievous' doctrine that being good and being wise are mutually exclusive, Storr and Choi make an affirmative argument that markets actively advance morality and community. That makes this book an interesting follow-up to Brennan and Jaworski’s 2015 book, Markets Without Limits. The Brennan and Jaworski strategy was to make a strong claim: if something is moral to make or do, it cannot be immoral to buy or sell that thing. They then considered a catalog of possible counterarguments an found that all such claims can be rebutted. Storr and Choi, by contrast, argue that markets are affirmatively moral, in several important senses. As I see it, there are three central charges commonly leveled against the morality of markets. One is the claim that markets exploit workers and turn them into brutes; the second is that the commodification of things and the use of prices to direct allocation decisions corrupts the moral sense humans naturally possess and would otherwise use to motivate cooperation; and the third is that a common consequence of markets, extreme inequality, is corrosive to collective institutions of community and democracy. Storr and Choi acknowledge the potential force of each of these claims (and more besides; I’m simplifying a bit), but address the claims with an affirmative defense [...] There’s a lot more in this book to think about. I expect that some of the empirical conclusions will be contested, but that’s partly because the authors are trying to do something new. As Storr and Choi (p. 7) rightly point out, many previous defenses of market morality have not really addressed head on the concerns of critics. The merit of this book is that it does take on those arguments and concerns directly, and offers some persuasive answers and attractive avenues for further inquiry."

About Virgil Storr and Ginny Choi

Ginny Seung Choi is Associate Director of Academic & Student Programs; a Senior Fellow in the F.A. Hayek Program for Advanced Study in Philosophy, Politics and Economics; and a Senior Research Fellow at the Mercatus Center at George Mason University. Previously, she was an Assistant Professor of Economics at Saint Vincent College.

Table of Contents of Do Markets Corrupt Our Morals?

Chapter abstracts have been copied from SpringerLink. 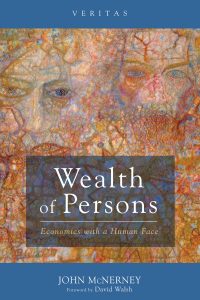 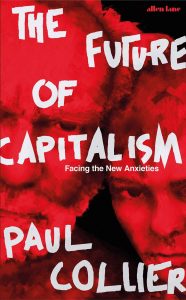