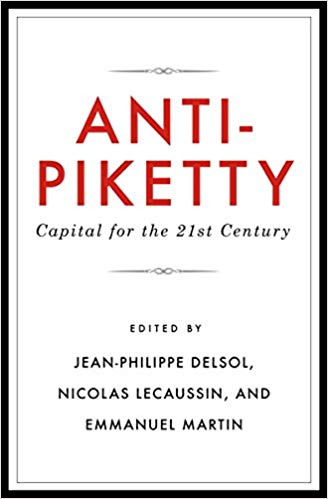 Thomas Piketty's book Capital in the Twenty-First Century has enjoyed great success, both among academics and the general public. Its influence on politics also cannot be denied. His book provided something people had waited for – a new scientific theory about wealth and inequality. However, there were criticism. Anti-Piketty: Capital for the 21st Century collects those essential criticisms from twenty specialists―economists, historians and tax experts―who provide scientific and rigorous arguments against Piketty's central theses. These researchers, who come from many countries and many backgrounds, examine the notions of inequality, growth, wealth and capital that Piketty treated in his book. They show in new ways how inequality did not explode, the rich are not rentiers but rather entrepreneurs who take risks and create millions of jobs, that wealth can not indefinitely grow faster than economic growth, and that radical taxation does not solve problems but aggravates them.

"Piketty’s portrayal of capitalism has not gone unchallenged, and Anti-Piketty collects a number of the most important criticisms of it. One of the most telling of these criticisms is obvious. If capitalism has been so bad for the poor, how can it be that the standard of living for the poor has vastly increased? [...] How might Piketty respond? It is apparent from his book that what concerns him is the gap between rich and poor, more than the quality of life enjoyed by the poor. [...] But this would open Piketty to a further objection. Why is inequality bad? If you lead a good life but others are much better off, why do you have any cause for complaint, just because of the inequality? That is a fundamental question, but unfortunately it is not addressed in Anti-Piketty. [...] Has he shown that inequality is in fact rising? [...] The historian Phillip W. Magness and the economist Robert P. Murphy in a joint paper analyze to devastating effect Piketty’s statistical evidence for inequality. They come close to charging Piketty with fraud and deception [...] Piketty’s signature tune, the r>g formula, fares no better at the hands of the contributors to this book."

Anonymous reviewer on Institute for Research in Economic and Financial Issues wrote:

"The book dissects how the one-dimensional explanation given by Piketty of the evolution of capitalism towards a “potentially terrifying” inequality is actually flawed. Anti-Piketty follows three major lines of criticism. First, following a long line of doomsday sayers, Piketty’s apocalyptic “vision” is that of a pessimist who totally dismisses the reality of the reduction of many types of inequality - from access to consumption or access to education, to longevity, to poverty levels among countries. [...] Second, whilst Piketty’s Capital was sold on the pretention of its data, some authors actually challenge its empirical content. [...] Third, the theory is not without problems. Of course, simple formula can make good theories. But sometimes they just don’t. Economics is complex. It’s about human creativity, incentives and responses to different legal environments. Trying to encapsulate the evolution of capitalism in one simplistic 'macro' formula is actually a sign of a misunderstanding of how complex 'institutions' shape our societies and economies."

Table of Contents of Anti-Piketty

Section 3. No Capital for the Poor?

Part 2. Criticizing the Empirical Strength of Capital in the 21st Century

Section 6. The Dangers of the Historicist Method 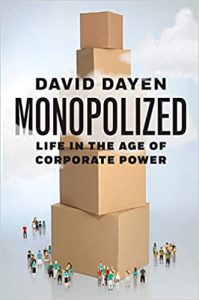 Monopolized: Life in the Age of Corporate Power (2020)