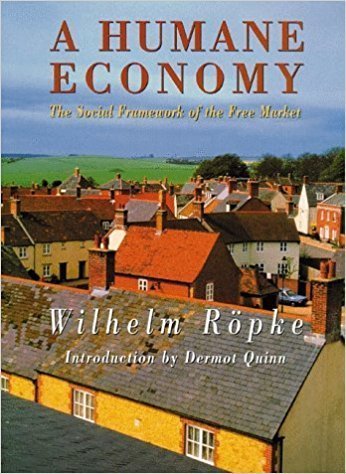 A Humane Economy offers an understandable and compelling explanation of how economies operate. Over and over, the great German economist stresses one simple point: You cannot separate economic principles from human behavior.

According to Wikipedia, Wilhelm Röpke (1899 – 1966) "was Professor of Economics, first in Jena, then in Graz, Marburg, Istanbul, and finally Geneva, Switzerland, and one of the spiritual fathers of the social market economy, theorising and collaborating to organise the post-World War II economic re-awakening of the war-wrecked German economy, deploying a program sometimes referred to as the sociological neoliberalism (compared to ordoliberalism, a more sociologically inclined variant of German neoliberalism)."

"What is really inspiring is the thorough way in which Röpke thinks through the key concepts in this debate. For example, his discussion of what at the level of principle distinguishes a planned economy from a market economy is very elucidating."

Anonoymous on The Hipster Conservative wrote:

"While his primary concern is the historical context of the struggle between Communism and Capitalism during the Cold War, Ropke provides explicit and implicit arguments for a sustainable free market economy that show a middle way the line between the oppressive ideology of socialism and the chaotic ideology of anarcho-capitalism."

"This is Röpke at his best. For me there has never been a more powerful defense of economic liberty than A Humane Economy precisely because Röpke understands its limits. His attack on social rationalism, whether of the Left or the Right, is as devastating as it is witty."

"This work, and professor Röpke’s other works, should be read by every student of economic and social thought, and every lover of civilization and freedom."