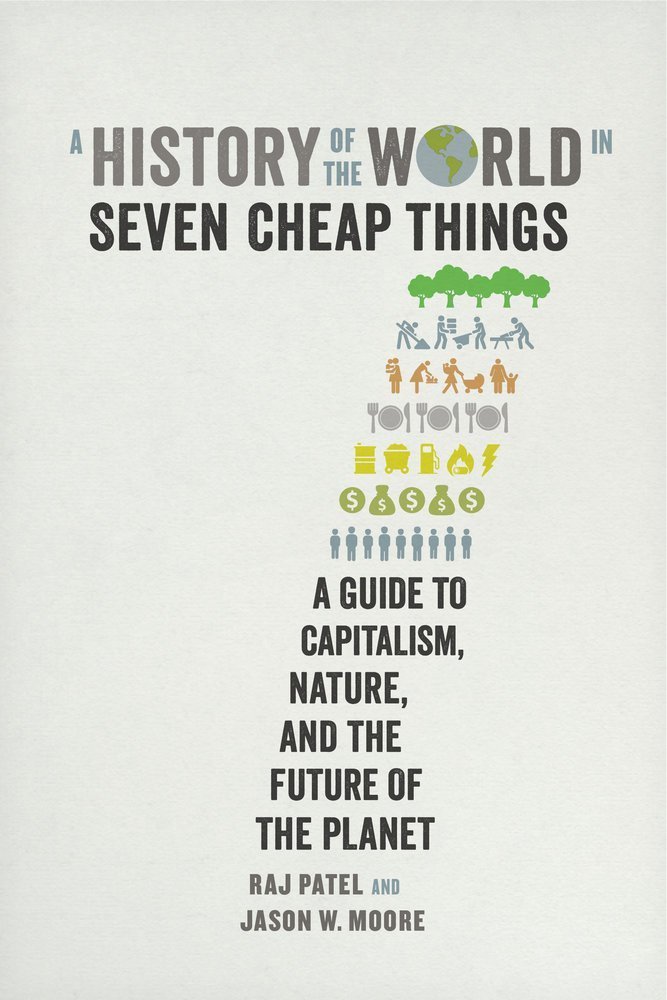 Nature, money, work, care, food, energy, and lives: these are the seven things that have made our world and will shape its future. In making these things cheap, modern commerce has transformed, governed, and devastated Earth. In A History of the World in Seven Cheap Things, Raj Patel and Jason W. Moore present a new approach to analyzing today’s planetary emergencies. Bringing the latest ecological research together with histories of colonialism, indigenous struggles, slave revolts, and other rebellions and uprisings, Patel and Moore demonstrate that throughout history, crises have always prompted fresh strategies to make the world cheap and safe for capitalism. At a time of crisis in all seven cheap things, innovative and systemic thinking is urgently required. This book proposes a radical new way of understanding — and reclaiming — the planet in the turbulent twenty-first century.

1-Minute Intro of the Book by Patel

More time? You may want to watch this lecture (1 hour 16 minutes) by Patel on the book

Reviews:Mark O'Connell on The Guardian wrote:

"Patel and Moore’s essential argument is that the history of capitalism, and therefore of our current mess, can be usefully viewed through the lens of cheapness. [...] The seven 'things' of their misleadingly clickbaity title are not objects or consumer products, so much as conceptual categories: nature, money, work, care, food, energy and lives. They present these categories as reliant on each other for their cheapness, as enmeshed in a kind of ecosystem. [...] One of the most persuasive aspects of Patel and Moore’s argument, in this sense, is their demonstration of the extent to which capitalism’s reliance on cheap labour is itself reliant on what they call cheap care – the domestic work mostly performed for nothing, and mostly by women, that is rarely factored into the cost of labour. [...] The book itself is not much over 200 pages, followed by a further hundred or so of notes and references – a high proportion of which can be taken to illustrate Patel and Moore’s extreme scholarly hyperactivity. [...] They move rapidly between economic analysis, history and political polemic, all in service of the premise that all the cheapness has in fact been catastrophically expensive. Their movement is not always fluid or seamless; the authors have a tendency to end their chapters with inelegant mechanisms of transition. [...] The book ends with a brief but hopeful conclusion, introducing an idea the authors refer to as “reparation ecology”. The concept is delineated only hastily, and hazily, though it involves a broad redistribution of natural and cultural resources, and a proper valuation of all the things capitalism has cheapened over the centuries. There’s no real attempt to work through how this might be achieved; it’s offered less as a programme than as a provocation to imagine a future outside of capitalism’s violent imperatives."

"The style and organization of the book are intended to move the discussion about how the current situation came to be and what can be done out of the academy, engaging a wider audience. [...] The basic premise of the book rests on several concepts, a number of which have appeared in co-author Jason Moore’s earlier work. World ecology is introduced [...] Concepts and binaries such as Nature and Society, they argue, which emerged in sixteenth century Europe, both obscure reality and their own violent, colonial and capitalist origins. [...] Key to cheapening is the role of frontiers, or 'encounter zones' between capital and all forms of nature, including human life. [...] Their ideas about the seven cheap things are often conveyed through the clever use of examples, such as Chicken McNuggets which embody a system of industrial scale production and consumption of chickens, reliant on cheap energy and cheap poultry workers. [...] Not all the chapters are equally engaging and convincing. The chapter on Care, for example, focuses largely on what we might call the social reproduction of labor through the oppression of women and the unpaid work of care. The chapter meanders, however [...] What then is the alternative? Patel and Moore acknowledge that there is no single response to capitalism’s challenges or a single recipe for transformation. Rather, they offer a set of broad approaches that form a 'reparative ecology,' which actively remembers how capitalism’s ecology came to be and provides a path to learn to act differently within the web of life. These five 'R’s' — recognition, reparation, redistribution, reimagination and recreation — offer a way to think, they argue, 'beyond a world of cheap things' (212). Given their convincing argument about capitalism’s strategies and ability to adjust and compensate, what might be the basis of this optimism? [...] While the reader may not agree with all the analyses and claims in this book, its sweeping historical scope, engaging examples, and accessible style make it a useful contribution broadening people’s understanding of capitalism and the destruction it has brought to the web of life."

"Patel and Moore present their rich and complex topic within the framework of a new discipline they call 'world ecology.' Its global perspective draws upon a multiplicity of diverse histories that range from land use in thirteenth-century England to the origin of race typologies. The book’s analyses cover centuries rather than decades, and careful attention is paid to historical trivia. Paragraphs sweep through trends. Every other sentence is footnoted. [...] All this makes for fascinating, albeit challenging reading. Capitalism’s interchanges with the web of life are myriad. Keeping track of them feels a bit like assembling a jigsaw puzzle of a thousand pieces. What emerges is a penetrating perspective of an ecology that has significantly shaped and been shaped by the life-making processes of our planet. [...] the book’s most significant contribution to a new understanding of capitalism is its discussion of the nature/society divide. [...] A History of the World in Seven Cheap Things is much more than an academic study of an old topic using a new discipline. Patel and Moore write with a compassionate urgency that I found compelling and relevant."

Chapters besides the introduction and conclusion:

Raj Patel is an award-winning writer, activist, and academic. He is Research Professor in the Lyndon B. Johnson School of Public Affairs at the University of Texas, Austin and Senior Research Associate at the Unit for the Humanities at Rhodes University. He is the author of Stuffed and Starved: The Hidden Battle for the World Food System and The Value of Nothing: How to Reshape Market Society and Redefine Democracy.

Jason W. Moore teaches world history and world-ecology at Binghamton University and is coordinator of the World-Ecology Research Network. He is the author of several books, including Capitalism in the Web of Life: Ecology and the Accumulation of Capital, and numerous award-winning essays in environmental history, political economy, and social theory.

If you like A History of the World in Seven Cheap Things; A Guide to Capitalism, Nature, and the Future of the Planet (2017), you might be interested in: 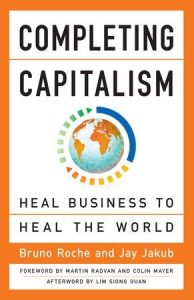 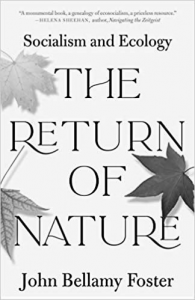 The Return of Nature: Socialism and Ecology (2020)