When the Italian-born economist Luigi Zingales came to the United States in the 1980s, he embraced the American Dream: the belief that what brings you success is hard work, not luck or who you know. But the economic events of the past decade have put American capitalism in crisis. Now, living in America's heartland, Zingales warns in A Capitalism for the People that the U.S. economy risks deteriorating into a pro-business system run by corrupt politicians, rather than a pro-market system that serves the people. Presenting a real-world blueprint to restore true competition to our economic system, Zingales gives hope that the U.S. can rebound to greatness.

Luigi Zingales is the Robert C. McCormack Professor of Entrepreneurship and Finance and the David G. Booth Faculty Fellow at the University of Chicago's Graduate School of Business. He serves as the director of the American Finance Association, a faculty research fellow for the National Bureau of Economic Research, a research fellow for the Center for Economic Policy Research and a fellow for the European Governance Institute. He is a contributing editor of City Journal. For more info, see the personal website of Luigi Zingales.

"On and off Wall Street, Mr. Zingales contends, crony capitalism is displacing fair and free competition. What to do about it? A chaired professor at the University of Chicago's Booth School of Business, Mr. Zingales is out to rebuild the American meritocracy. He wants to shame Washington lobbyists, to empower the American health-care consumer and to make corporate directors truly accountable to the shareholders. As for business schools, they 'should stand up for what they think is the individual responsibility of a good capitalist.' In regulation, Mr. Zingales demands simplicity. Let us have three focused federal regulatory agencies, not the chaos of competing bureaus that now confuse the situation."

"Zingales is an entertaining and helpful guide to the story of how the U.S. government’s bailouts of Wall Street firms triggered populist resistance on both the left and the right of the U.S. political spectrum. He believes that regulatory capture -- when business interests and lobbyists exercise undue influence over the bureaucracies and legal structures meant to oversee them -- is creating exactly the kind of crony capitalism that sparked major populist surges in earlier eras of U.S. history. With a worried glance at Latin America, where antimarket populist leaders have led a number of countries into deep trouble, Zingales argues that pro-market populism can help fuel economic recovery in the United States and calls for policies that would foster a sense of fairness and bolster public support for capitalism and free markets. At times, the policy discussion seems a bit disjointed, and the enthusiasm Zingales has for economic theory sometimes leads him into digressions. But overall, this is an important and engaging look at some of the most consequential issues facing the United States today."

"I have long said 'you can't put Luigi Zingales in a box', and his undogmatic style is on display here. This helps make the book unquestionably insightful and thought-provoking, and it has plenty of smart policy recommendations. On the back cover Brad DeLong blurbs that Zingales has 'done a very good job' at updating the small government free-market libertarianism of Milton and Rose Friedman’s Free to Choose for the problems of our generation. I am not sure it rises to the level of Free to Choose. Perhaps this is simply because such a book cannot be written today. I hold out hope that it can. But in the meantime, I do strongly recommend A Capitalism for the People to anyone looking for a robust and pragmatic vision of free market economics directed at current problems. Despite the many positive reviews, including, in general, my own, there are areas where Zingales fails to muster a persuasive amount of evidence. [...] While the book has shortcomings, there are also areas where Zingales proposals and ideas are stronger than his critics believe. [...] There will be places where you are unconvinced, but overall Zingales' idea of free market economics has plenty going for it, especially in facing up to the problems that the current age faces instead of denying them. This is a crucial step in making sure free market ideas are relevant; a task that would be a lot easier if more libertarians, and economists for that matter, were as creative and iconoclastic as Zingales."

Matthew Dylan Mitchell on The Review of Austrian Economics wrote:

"some of the best passages of A Capitalism explore the messy relationship between culture, markets, and government. [...] Zingales is desperate to save competitive, meritocratic capitalism from the clutches of
crony capitalism. And in this desperation, he suggests dozens of policy proposals. This makes the book fun, but also frustrating. Just as I was hoping to give his latest idea a test drive—to consider its downsides, and the secondary and tertiary consequences—he was on to the next idea. [...] Some of Zingales’s solutions suggest a Hayekian appreciation for spontaneous order and the evolutionary process of institutional development. Thus, his preferred method of restraining rent-seekers is to regulate them through social norms [...] Some of his other proposals are closer to the James Buchanan mold of constitutional political economy: forget about evolutionary change and reason through the optimal set of rules as if you were a constitution-maker. [...] Like many economists, Zingales worries about monopoly power and recognizes that the state is often its source. [...] In the end, he endorses a 'zero tolerance' approach to subsidies and tax loopholes while he is more comfortable with regulatory interventions. This is curious. The regulatory process is opaque and complex, arguably making the code of federal regulations an easier place to hide a targeted privilege than the federal budget or the tax code. But Zingales hasn’t enough time to dwell on such considerations; he has too many other interesting and creative ideas to consider."

Zingales at the Chicago Humanities Festival in 2013

Table of Contents of A Capitalism for the People

Part One: The Problem 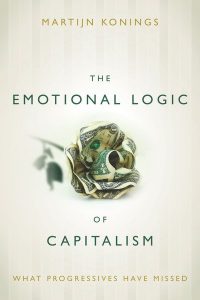 The Emotional Logic of Capitalism; What Progressives Have Missed (2015)